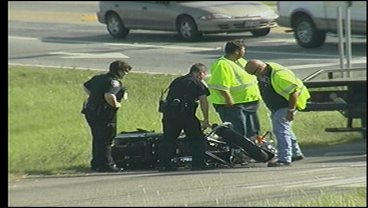 This morning, a motorcycle accident just off of Highway 75 and the Loy Lake Road exit.

It happened around 10 o'clock this morning.  A motor cycle slide underneath a pickup truck. Officials by the time the driver saw the red light, he just could not slow down in time.

In order to avoid a collision, the driver laid down his bike, but the action threw him off and sent the motorcycle skidding underneath the truck.  Officials say the man was a new owner of the bike, he purchased the motorcycle this past Tuesday according to his papers.

When officials arrived on scene, they helped the man into an ambulance.  Once inside the officers began questioning the driver and became concerned when he was unable to answer simple questions such as his phone number.  Care flight was called to the scene and he was airlifted to Dallas with a wrist and possible head injury.

Officials say he was not wearing a helmet at the time of the crash but the injuries he sustained are non life threatening.  There was minimal damage to the truck he slid under and all occupants inside that vehicle were okay.