How Can You Help Conner McDougall? - KTEN.com - Texoma news, weather and sports

How Can You Help Conner McDougall? 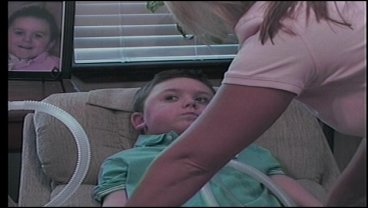 A little boy you're sure to recognize.  His name, Conner McDougall.  His place in Texoma history?  Proving miracles happen, even in the worst of circumstances.  But now this little survivor needs your help again.  Meredith Saldana sat down with Conner and his mom, Sonya, and has more on their story.

You talk about a true surviving spirit that's alive and well in that home.

Conner's mom says he's doing so well, in fact,  that it's time for him to start breathing on his own.

Sonya McDougall says, "Conner is definitely a miracle and there's no doubt about it."

Her husband Chris, and her sons Adam and Conner were involved in a horrible wreck but only Conner would survive.

And despite their best efforts, even doctors in Dallas told Sonya she should let him go as well.

"You know my thought that day was when they sat down with me, there's no way.  Conner's all that I have left.  You know I've lost my whole family."

That's when this mother put her faith in God and brought Conner home to Dickson.

It was her husband Chris' favorite super hero and now Conner is following in his daddy's footsteps.

Three years after the wreck that nearly killed him, Conner is ready to come of the ventilator and breath on his own.

"This is huge. And this will just change Conner's life drastically for him.  Cause I mean you know it's kind of like being chained to something so.  We know he can breath, he over breathes with the ventilator."

But to do that Conner has to go back to Baltimore, MD to a hospital that specializes in spinal injuries.

A trip that insurance won't cover.

Conner's story touched the Turbo class at Fitness Professionals so they decided to help the McDougall's out and sponsor a fundraiser called "Turbo For a Cause".

Annie Harlow says, "Come out, help us raise money.  It's a free event, we're excepting donations at the door.  We've got some great door prizes to give away."

The family has received emails, birthday cards and prayers from people as far away as China, Germany and Africa.

Conner's Grandmother Gail Conway says,  "There are so many prayers that go up for little Conner everyday and that's why we're where we're at today.  Because the power of prayer."

His mother says being on the ventilator means literally being tied down to their home.

Conner requires such specialized care that getting him off the vent means freedom and independence for both of them.

Sonya says, "I can't wait for that day to just be able to load my son up and go somewhere and do something by ourselves.   Go to the park anything so we look forward to that day."

The "Turbo For a Cause" fundraiser is Saturday from 9 am to 11 am at the Fusion Center in Ardmore, that's at the Baptist Church downtown.

You can even meet Conner.

It's for all ages and donations of course are encouraged.