Operation Falcon: Cleaning Up the Streets 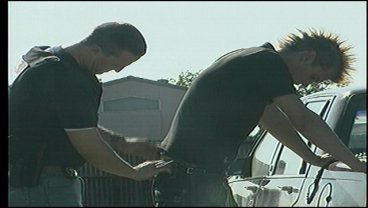 It's called Operation Falcon, an operation where, once a year, U.S. Marshals team up with local authorities to clean up shop and lock up criminals who have outstanding warrants.

In Grayson County over 50 arrests were made.

The streets are safer now that 93 fugitives have been locked up from Grayson, Fannin, Lamar, Denton, and Collin Counties.

Grayson County Sheriff Keith Gary says, "The criminals need to understand that this is not going to be a one time affair. It's going to be ongoing affair."

Throughout the month of June, U.S. Marshals suited up and teamed up with local authorities as part of Operation Falcon, an operation that's been going strong for five years.

Gary says, "We do roundups about once a week at the Grayson County Sheriffs Office, and ours numbers are pretty good, but we just don't have the manpower that you have when you throw together a big force like this."

A large enough force to track down David Glen Boyd, wanted for allegedly running over two people with his car near the Sherman Oaks Apartment Complex about a month ago. Boyd was one of Operation Falcon's most wanted. He was caught three weeks later.

Fannin County Sheriff Kenneth Moore says, "They provide us the opportunity to take these individuals into custody, where as otherwise we might not have had the availability."

Grayson County District Attorney Joe Brown says, "Having resources and the ability to go across state lines and national boundaries is a great help to us."

More than 50 arrests were made in Grayson County, and more than 20 Fannin County.

Since this operation started in 2005, agents took in more than 91,000 people. That's across the country. This year they took in more than 35,000 suspects for offenses like sexual assault, theft, and assault with a deadly weapon.