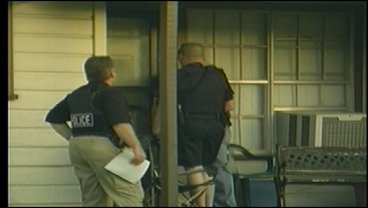 Today, a nation wide operation between the US Marshals and local police departments is being revealed to the public.  Operation Falcon rounded up numerous men and women wanted on outstanding warrants.

The US Marshals and police went door to door serving warrants to fugitives with outstanding felony charges.  They are currently holding a press conference this afternoon to reveal the success of this years operation to the public.

After they were sworn in, the US Marshals and police officers hit the streets in bullet proof vests knocking on doors, visiting family, friends and previous work locations of all the fugitives.   Officials say this year went smoothly, only a few tried to run but all were immediately apprehended.  Hundreds were arrested, cuffed and put behind bars during the operation.

The US Marshals say this year was even more successful than last year.  They cleared the streets of hundreds with outstanding felony warrants ranging from thefts, to aggravated sexual assault, sexual assault of child and kidnapping.

Today's press conference includes at least one representative from each county including Fannin, Grayson, Lamar, Collin and Denton County.  Its purpose is to share the operations success and the positive impact it has on our local community.

Officials say they will continue to search for fugitives that were not served during this investigation.  We will have more details on Operation Falcon available tonight at 5 PM.