United Way Donations: Where Do They Go? - KTEN.com - Texoma news, weather and sports

United Way Donations: Where Do They Go? 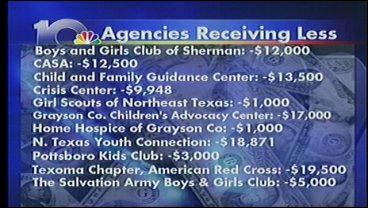 The new agency were talking about is Four Rivers Outreach in Sherman. They're receiving $50,000 the United Way. Director David Cortinas says with dwindling donations and a limited budget that money had to come from somewhere.

28-year-old Lisa Scott of Denison began abusing drugs and alcohol when she was 15-years-old.

"I lost everything, I got everything taken away from me to the point of not wanting to live anymore."

Now, 13-years later, she's been substance free for over a year thanks to Four Rivers Outreach.

"It took everything that happened to me to finally wake up and say I can't do this anymore."      d

Dug and alcohol abuse, it's exactly what a United Way study shows as the most pressing need in the community, and the reason why 11 agencies, including the Child and Family Guidance Center of Texoma, received less this year.

David Cortinas says, "There were 1.7 million dollars in requests this year and a little lower, $900,000 to invest."

Brenda Hayward with the Child and Family Guidance Center says this year they're getting nearly $14,000 less than in the past.

"What that boils down to in regards to services is it equates to approximately 200 therapy sessions that were going to have to find funding for somewhere else."

Some of the hardest hit agencies include The Boys and Girls Club of Sherman, CASA, Grayson County Children's Advocacy Center, The North Texas Youth Connection, and the Texoma Chapter of the American Red Cross.

United way CEO David Cortinas says it's not up to him to decide where the money goes.

"The money is invested in these agencies and is decided by volunteers."

As for Lisa Scott, who now has a job and is working to get her kids back, she says being clean after years of abuse is hard, but it's possible.

"I want a family, I want to be the mother that God has called me to be, I want to have a life, the nice house and a car, and I want to be able to make it."

The volunteers who made the decision on where the money should go include school teachers, business men and women, stay at home parents. Basically a mix of all walks of life.