How Your Fan Donations Are Helping Area Families 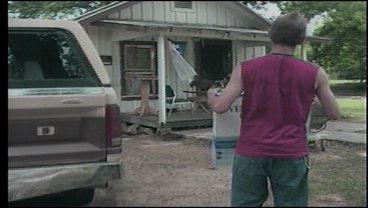 You've heard us talk about our KTEN Fan Drive and we appreciate all the fans you've donated.  But as the temperature continues to rise, the number of people in desperate need of those fans is increasing, too.  Meredith Saldana met with a couple who is benefiting from the generosity of our viewers who've been donating.   She has more on their story.

The Jellison family's air conditioner broke just a few days ago and they can't afford to fix it until possibly next month.

They saw the advertisement for the KTEN Fan Drive and came to us for help.

Our viewers have generously been donating fans to our Ardmore and Denison stations.

But we're reaching the hottest part of the year and the fans are going faster than we can collect them.

While most of us try to avoid the outdoors, families like the Jellison's sit outside to escape the heat in their own homes.

Jean Jellison says, "Well, when the heat index is about 110 outside I would say it's probably about 120-130 in the house with no air."

The family survives on two social security checks that equal about a thousand dollars a month.

Dennis Jellison says, "And then we pay our rent, our bills and our insurance and it's gone."

Dennis is epileptic and heat can cause him to have a seizure, making a $20 fan, even more important to his health.

And until they received their fan the family had to leave their home during peak heat hours in search of relief.

Jean Ellison says, "We'd try to go places like the library or things like that where there's air conditioning so we could have some place to cool off for a while."

But Dennis says adding the fan in the window has made the heat in his home more tolerable and he's hoping it will get them through this month and that by then he'll be able to save a little to get their air conditioner fixed.

For now the family says they're thankful to those who've donated.

"If you do something good for somebody else then it's gonna come back on you ten fold.  And I'm a firm believer in that so if you donate to somebody that really needs a fan and everything, something goods gonna happen back to you," says Jean Jellison.

If you'd like to donate a fan you can drop one off at the Denison station at 10 High Point Circle or at the Ardmore bureau at 1214 Merrick Drive.