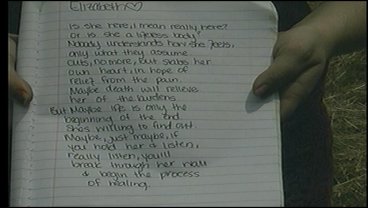 Able Wolf and his wife Denise are supposed to be in a Montana courtroom Thursday. Then, they'll either get sent back to Bryan County immediately, or after more paperwork is completed.

Of course, at the heart of this case, Able's 11-year-old daughter, Cheyenne, who authorities believe died at their Bokchito home more than a year ago. Her death was never reported, she was never even reported missing.

Kten's Vanessa Bolano spent the day where the family lived in Bokchito, and met with friends of Cheyenne Wolf and her older sister Sara Elizabeth to try and find out how an 11-year-old child could just vanish.

The quiet town of Bokchito has been turned upside down after allegations that a couple who moved from their house in august of 2008 may have killed their 11-year-old Cheyenne Wolf, buried her remains, and then moved her body cross country to Oregon and Montana.

Friends of the 11-year-old are in shock.

16-year-old Faith says, "I knew it was bad at home for them,but I didn't know it was that bad."

17-year-old Jennifer says, "I thought her step mom was crazy and that she seriously needed to get away."

12-year-old Charity says, "I didn't think she would turn up dead."

School officials say in January they received written notice from Cheyenne's parents that they were pulling her out of public school to home school her. At the time they had no reason to question that, but her older sister, 16-year-old Sara Elizabeth stayed in Rock Creek Schools  until May of 2008 before the family moved.

Faith says, "The last day of school she came up to me and gave me a big hug and said I probably won't see you again."

But Sara Elizabeth's friend did hang on to one of Sara Elizabeth's poems where she describes death, and a lifeless body, and one particular excerpt reads "Maybe death will relieve her of the burdens, but maybe life is only the beginning of the end."

Friends of the two sisters say their priority now is making sure Sara Elizabeth is safe.

Those friends told us, they're still in contact with Sara Elizabeth. We're told she is in protective custody in Montana. We don't have any details on the other sister, Skylark.

When we dug into the family history on whether DHS had ever been called to the home, we were told that information could not be released unless the parents are actually charged with killing the child.