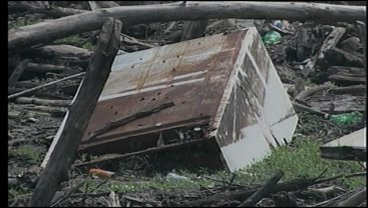 Viewers called in about a mess in Johnston County.  Now fishermen and those who live around it  want it cleaned up.  KTEN's Meredith Saldana looked into it for us and has more on this story.

Sandy Creek Bridge was a popular fishing spot and now it's filled with refrigerators, coke cans and even tires.

Jim McLaughlin says it's time to clean it up, "This Sandy Creek has always been one of the best places that there's been for crappie, sand bass, lots of catfish and different things and it has been an attraction."

Fisherman like Elbert Jackson used to frequent this area but say thanks to the floods it seems to be a thing of the past.

Jackson says, "It affects fishing because you can't fish in the holes where the fish used to be."

Now where you used to find fisherman, you see junk that's floated down and become trapped at Sandy Creek.

And it's not only affecting fisherman.

Jackson says, "It affects the economy here by the fact that the little businesses aren't getting people, the convenience stores."

He says business this year is taking hit.

His customers have complained about the mess before and now it seems many of them just aren't coming in town to fish anymore.

McLaughlin says, "This was just like this on Memorial Day weekend.  One of our big weekends and it was like this on 4th of July and I don't want it to be here on Labor Day!  We need to get the word out and get it cleaned up."

Melissa Holder with the wildlife refuge says, "Everything takes time and money so to those people who would like to see Sandy Creek cleaned up, we're working on it.  I assure you we are."

Their biggest obstacle is getting equipment.

Because of the flooding across the region, excavators are in high demand, which is delaying the cleanup process.

Holder says, "I wish I could tell you time wise how long it will take but since the excavator is in such high demand right now, I really unfortunately, cannot answer that question.  Because as soon as we get that piece of equipment then we will try to focus our efforts there at Sandy Creek."

McLaughlin says he isn't giving up.

He's going to do everything he can to try and get the mess cleaned up soon.