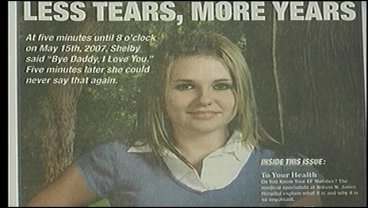 The CDC says car accidents are the leading cause of death for teens in the U.S., but it wasn't until that statistic hit close to home that two men decided initiate change.

16-year-old Shelby Johnson, of Pottsboro, was killed when her car and a dump truck collided. A month later, Shelby's friend, 17-year-old Jordan Onstott, also of Pottsboror, died. She was the passenger in another wreck.

That's when parents, and law enforcement said enough is enough.

Pottsboro Police Chief, Brett Arterburn, says, "Two years ago we started this as a local initiative to make our local teens safer."

Shelby's father, Phil Johnson, says Arterburn first told him of his daughters death. "We got to talking and we, especially Brett, felt like we were maybe doing something wrong, what can we do to change it?"

The two formed the Less Tears, More Years campaign. It started with just a handful of parents, but turned into a statewide initiative that just last week was signed by Texas Governor Rick Perry.

Johnson says, "We feel like it'll save lives. Might make adjustments to some of the mistakes teens make."

As of September 1st, teens driving in Texas will be required to take 34 hours of instruction, instead of 14, hold on to their graduated driver's license for a year instead of six months, and pass a new road skills test, as well as the state's written test. The law also bans the use of cell phones for drivers 18 and under.

Chief Arterburn says, "Wwe strive to teach our teens the right way to live, and the right way to be successful in life, and one thing I think we've fallen short on during our years is the responsibility of driving."

Johnson says it's a bittersweet victory that will hopefully keep others from experiencing the pain he went through with the loss of a child.

"I'm in a group now, a group of parents who have lost children, and I don't want anyone to join that group with us."