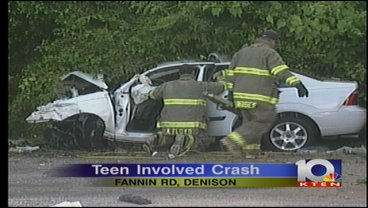 An update to an accident in Denison involving two Denison High School students.

So far, no names released. We do know both are 16 years old and both were flown to Parkland hospital.

This happened just after 4 p.m. Monday on Fannin Road near Sage Brush, just south of Spur 503.

Witnesses told our crew at the scene it was a head-on collision, and the teens then hit a tree.

Authorities now tell us, there was just the one vehicle involved.

No names or exact conditions yet on the two teenagers involved.