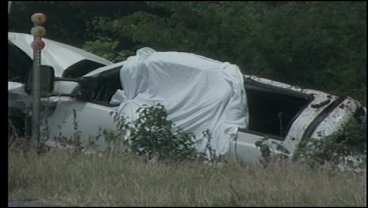 Family members called us on Sunday to help find 41 year old James "Jim" Leon.  He owns Daylight Donuts in Ada but vanished after he left Lake Texoma Friday night and hadn't been seen since.  Monday, a tragic end to the search.  Meredith Saldana has the latest.

Monday afternoon the Oklahoma Highway Patrol found Leon in his wrecked truck off of highway 99 just south of Fittstown.

Leon was last seen near Lake Texoma late Friday night and according to family, phone records show he placed calls in the overnight hours, but never showed up to work on Saturday morning in Ada.

Monday, the Oklahoma Highway Patrol took their airplane out and circled the highways Leon would have taken from the lake back up to Ada.

Just after noon, the family was notified that OHP had spotted Leon's wrecked truck.

Leon had driven off an embankment on the side of the road and into a creek.

Although family and law enforcement had traveled that stretch of highway several times in search of him, troopers say it was very difficult to see.

Trooper Robert Benedict says, "The vehicle was almost completely hidden of course by the depth of the ravine and by some brush.  So it would've been difficult to spot going either direction unless you just got out and walked the ditches."

The investigation is ongoing.