Two Killed, Seven Injured In Pile-Up On I-35 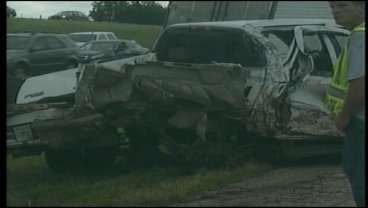 Two people are killed, and seven more injured after a pile-up crash on I-35 in Gainesville.

It happened around 2:30 Sunday afternoon, south of Spring Creek Road in the northbound lane of the interstate.  Traffic was backed up and going slow through a construction zone, when an 18-wheeler failed to break in time and slammed into the back of a Ford Explorer.  From there the accident snowballed causing a nine-car pile-up.

Two people inside the Ford Explorer were killed. Gervious Hinkle and his 13-year-old grandson, Casey Ishak. Both are from Ft. Worth. One other person riding in that SUV remains in critical condition at a Dallas Hospital. Six more people were taken to regional hospitals in Gainesville and Denton.

Officials are working to determine why the driver of the tractor-trailer did not stop.

"My concern is people driving too fast on the highway," said Dorothy Lewis, Justice of the Peace. "Texting on the phone, talking on the cell phone and not paying attention, especially an 18-wheeler."

Highway Patrol say Randy Crume of Oklahoma was behind the wheel of the semi. Texas troopers say Crume could face charges.