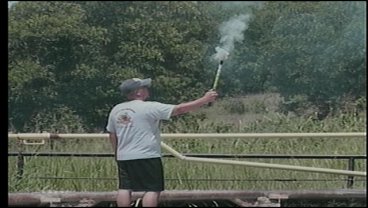 The Ardmore Fire Marshal says their first tip is to leave it to the professionals and go see a public fireworks display in your area rather than shooting them yourself.

But if you must buy fireworks this holiday weekend, keep in mind that fireworks are explosives and extremely dangerous.

Ardmore Fire Marshal Clyde Ellis says if you are going to light them don't do it near brushy areas and always keep water nearby.

And remember, you can't shoot them in the Ardmore city limits.

In fact, if you're caught with fireworks in the city limits that aren't in their original packaging you could receive a citation of more than $200.

This goes for sparklers as well.

Ellis says more people are burned with sparklers than any other firework.

"There's more fire burn injuries around the 4th of July then there is the rest of the time of the year.  Fireworks are only sold 2 weeks out of the year so you've Ota be real careful."

Casey Hall owner of Hall's Fireworks just west of Lone Grove says that even though many fireworks look kid friendly, kids should never be left alone with the explosives.

And if you have a firework that happens to be a "dud" soak it in water before picking it up.

If you're caught in the Ada city limits with fireworks you could receive a citation of more than $500.