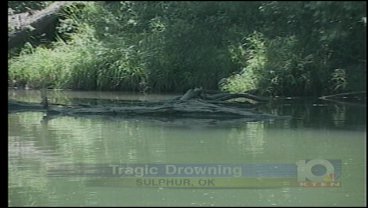 Gregory Barker, 32, lost his life while trying to save his fiance's 8-year-old daughter near Veteran's Lake  in the Chickasaw National Recreational Area Monday evening.  Meredith Saldana was at the park as law enforcement continued their investigation.

Right now we do know alcohol does not appear to be a factor.

And park officials say the man's actions were heroic but it was a tragedy that could have been avoided.

Park officials say the child was able to pull herself above water by grabbing onto him, pushing him down and pulling herself to safety on a log.

She has since been treated and released.

They say to first, reach with something like a fishing pole or towel without getting in the water.

Then throw them something that floats like a buoy, life vest or even a cooler.

And if you have a boat, without using the motor, carefully row yourself to them.

Eric Leonard, Park Ranger, says, "And then finally don't go.  If you're not a trained rescue person you're taking a big risk.  And that's exactly what happened in this instance.  And someone's life was saved but it's balanced, unfortunately, by the fact that a life was lost as well."

This 4th of July weekend is expected to be a big weekend for lake goers and park rangers ask that everyone make sure you have life vests with you and that you use extreme caution while still having fun.

The park also says make sure you know exactly where you are in case you need medical assistance this holiday weekend.