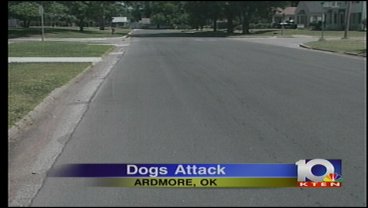 Two pit bulls remain quarantined in Ardmore after attacking a 19-year-old woman and her dog in her home.  KTEN's Meredith Saldana was in the neighborhood where this happened and has more on this story.

The dogs are with a local veterinarian and police say they can actually stay there for up to ten days if their owners don't provide proof of a rabies vaccination.

Residents in the 100 block of G Street SW are on alert after Monday's incident.

They say they watched the commotion from their yards, too afraid to get any closer.

Herbert Davis is often outside working on his yard and says loose dogs in the neighborhood concerns him.

"Of course it alerted us to the fact that could have been one of us or our neighbors little boy that was over here mowing the lawn right close to where this happened.  And that dog, those 2 dogs, would have attacked about anybody where ever there was possibility."

Police say the victim suffered wounds to her arms hands and knees and the dogs also attacked a Schnauzer inside the home.

Police say it appears one of them broke the chain and ran away.

The owner says they weren't home when they got loose and didn't realize what had happened until hours later.

Police say the owner may face up to four citations, two per dog, for harboring vicious animals, allowing an animal to run at large.