Lake Murray Fireworks Will Go On Thanks To Donations - KTEN.com - Texoma news, weather and sports

Lake Murray Fireworks Will Go On Thanks To Donations 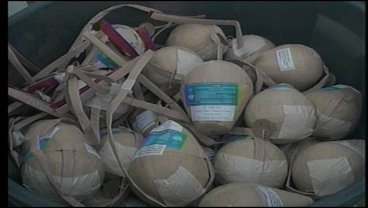 The Lake Murray fireworks show is one of the largest publicly sponsored firework displays in Oklahoma and because of the economy funding this year was down.  Meredith Saldana has more on what this means for this year's show.

Good news, thanks to a single donation of $1,000 by an area resident the goal was finally met and the show will go on!

In the last few years the economy has continued to struggle making it even harder to raise the money needed for the popular fireworks display here in southern Oklahoma.

The goal was $10,000 and Janet Bateman the Marketing Director of the Ardmore Convention and Visitor's Bureau says they were very excited and thankful for the last second donations.

With a few small changes they will be able to have a 4th of July celebration just as big as in previous years.

Boy Scouts will be collecting donations the night of the big show to help with funding for next year's show.

The fireworks are set to begin at 9:15 PM Saturday night at Lake Murray.