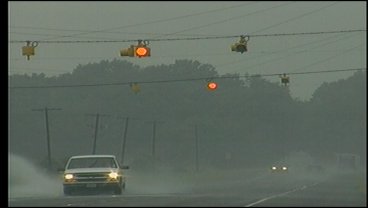 Berry says, "People coming off of the get on ramp look like they're going faster then they really are, so people on Highway 11 slow down to try to avoid an accident, and it ends up resulting in a collision."

Just last week, two men lost were killed in a chain reaction wreck, when they tried to help someone else in a car accident at the intersection. Berry says it's almost happened to him. "I've actually had to increase speed one time to get around someone."

Yet not all feel it's the intersection that's dangerous. Some blame drivers.

Casey Talbert says, "People do speed through there but you can always judge how fast another vehicle is going."

Harriet Nix says, "We've only lived here a year, and no I don't think it is, people do need to have caution when they're driving anytime."

TxDOT officials say two years ago blinking yellow lights were installed to make drivers more aware, and maintain the intersection is not dangerous. They believe accidents there are caused by drivers who just aren't paying enough attention.

TxDOT officials do say they're going to look at reducing the speed limit in the area and reconfiguring the intersection.