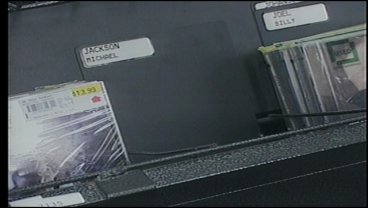 Friday morning Hastings in Ardmore opened to a line of Michael Jackson fans waiting to buy CD's and DVD's of the King of Pop.  Meredith Saldana was there and has the story.

The early birds definitely got the worm.

By noon the store was completely sold out of anything related to Michael Jackson.

Leaving some fans disappointed but determined.

Valinda Perry of Grapevine, Texas says "This is the last USA Today special edition of Michael King of Pop so they'll have a bunch of stuff on him."

Hasting's Assistant Manager Summer Houghton says, "They're looking for T-shirts and posters and music and books and pretty much anything."

Valinda Perry stopped in Ardmore looking for more Michael Jackson memorabilia after shopping at the Walmart in Madill.

Perry says, "So I happened to find their last Michael Jackson album it was the Thriller 25th Anniversary and it had a bonus DVD's from the Motown 25th Anniversary Show where he does the famous moonwalk."

If you weren't able to pick up the DVD's you may have been lucky enough to see the moonwalk first hand.

Although Hastings had sold out of everything Michael Jackson it didn't stop the customers from dancing to his music.

Hastings started playing Jackson's albums for the customers Thursday evening when they heard the news.

Houghton says, "We needed a tribute.  You know we need to remind people of all the good stuff like the songs and here everybody who comes in here you know they're dancing to it.  You can't help but dance to it.  And just kind of think of all the good things and like all the awesome music that really just came out of his life."

Perry is headed to Oklahoma City and says while she's doubtful she'll find anything she won't give up her search.

Perry says, "So we'll stop at every truck stop, every Walmart and maybe we'll find Jackson Five but if not at least we'll listen all the way."

The store says they have ordered more Michael Jackson memorabilia but they expect stores nationwide to also be ordering so they're not sure exactly when they'll receive it.