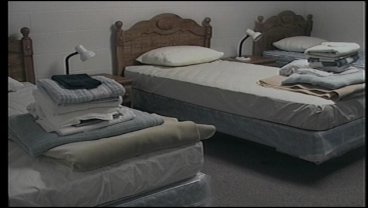 We told you Thursday the homeless numbers in Ardmore are on the rise. Meredith Saldana visited the new Salvation Army Women's Shelter to see if their numbers have increased.

They have, in fact, they've only been open for a week and have already reached their maximum capacity.

The Salvation Army says they opened the Women's Shelter because they realized the numbers were rising.

Since then they've seen quite a few women and children come through.

Corps Assistant Acie Turner says as the economy gets worse they're seeing more first timers come to them for assistance.

Turner says they're seeing quite a few people who just a couple of years ago had a great job and were actually donating to the Salvation Army.

Now, they're on the other side in need of their services.

Turner says, "It does it has a lot to do with it cause you know you have your typical thing of what a homeless person would be but it's nothing like that.   There are homeless people that are very well educated and just fall through the cracks."

We also checked with other area Salvation Army's:

Sherman says their shelters have also been full.

Just a few weeks ago there were only a handful of people, since then their numbers have tripled and they're having to bring in cots to make room for those in need.

And the Salvation Army in Ada says this month alone their numbers have doubled.

Of course with the rising numbers comes the need for donations.

The Ardmore Salvation Army is asking for monetary donations.