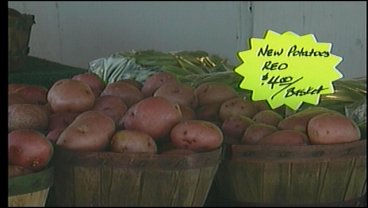 It's a return to a simpler way of life, but also a growing business. Instead of heading to the supermarket, folks across Texoma are going green - scooping up fresh produce at a roadside stand or local farmers market. KTEN's Katy Blakey has more.

"They like the fresh stuff," said owner and operate Randy Davis. "Eat fresh. Eat healthy. That's the way it is."

Despite climbing gas prices and tough times business is growing.

Recent studies show consumers would rather buy fresh produce from local growers than do all their shopping at a supermarket -- even if it means spending a few extra dollars.

"You don't have to worry about pesticides," said Cyrstal Teaster, who drove from Durant for fresh fruit. "It's just healthier."

Consumers are also attracted to the hometown feel of a produce stand. And Randy's place is all about home grown. He's been in the business for over 20 years and now his daughter helps out.

"I work in the front and basket stuff in the back," said Savannah Davis.

Most of Randy's business are repeat customers, wanting another taste of those juicy peaches, tomatoes and cant elope.

"If they stop once, they're hooked."

In Oklahoma, you can find fresh produce at Ardmore's weekly farmers market. Starting Saturdays at 7:30 a.m. all produce is guaranteed to be grown in Oklahoma. Fruits and vegetables sell out fast. Most produce is gone by noon. City leaders expanded the market because turnout was overwhelming -- another sign fresh produce is in demand.