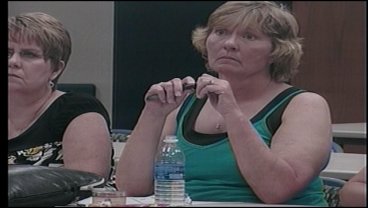 In Carter County, the Oklahoma Bureau of Narcotics put on a meth awareness luncheon, Thursday.  Oklahoma leads the nation as the state with largest meth problem and narcotics agents said it's time to take a stand.  Meredith Saldana was there and has more.

There were about 70 people at the meeting, that's about double the number they were expecting.

But speakers said it just proved how many people agree meth is a problem in our area.

Travis Kirkpatrick with Oklahoma Bureau of Narcotics says, "Children are starting younger with these drugs and the younger that we can get to them and say here's some of the negative affects cause you're not gonna hear those things from their peers that are using drugs.  They're only gonna hear the positive things from the drugs so the more that they can hear from us about the bad things that can happen with these drugs the better."

A power point was shown with pictures of what the different drugs look like and what people use to partake in the drugs so family members can be aware of possible use in their families.

10-year-old Miranda Robinson's dad was an addict for 20 years and although she's never experimented with drugs she says it has affected her life.

"Because like I had to stay away from my dad for a while."

Hannah Arterberry has also grown up around addiction and says she learned even more at Thursday's meeting.

Arterberry says, "I learned that it could affect your life more than I thought it would and that it could hurt you and kill you and it's just not good for you."

Another meeting is scheduled for July 23rd at the Carter County Health Department.