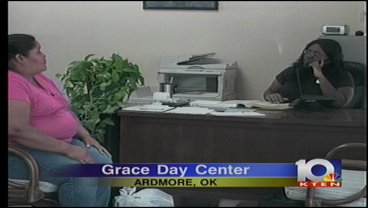 The Grace Center in Ardmore just opened a new wing aimed at helping the homeless population.  Meredith Saldana sat down with a woman who says the group has helped her turn her life around.

The new center has been in the works for several years but it seems it couldn't have opened at a better time.

Since October of last year their numbers have tripled and the Grace Center expects this trend to continue.

It opened to help the homeless community get back on their feet.

Brenda Myles recently visited the center after she says she had hit rock bottom.

She had lost her job, her home and didn't have any extra clothing with her.

For her, the Grace Center was a blessing.

Myles says, "They've helped me.  They've helped me feel like I can achieve stuff.  And I just need to take the steps.  Like they say you've gotta crawl before you walk and this is the way. This is really a big step to get to where you need to go."

Myles has just graduated from the Grace Day Center's workshop and plans to get her GED and find a part time job.