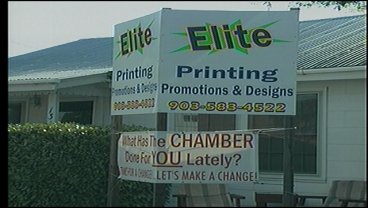 A sign created by a local resident sparked an Executive meeting today at the Bonham Chamber of Commerce.  The sign's message read "What has the Chamber done for you lately?"  It was created to get the board's attention over an issue stemming from a t-shirt, but the problem was bigger than just a shirt.

Katie Dunlap, a local graphic designer says, "There is a lot of talk around the community about some out-of-state businesses that came in and tried to sell things to the Chamber.  If the sale went through it would be taking money from the community and instead of our Chamber saying 'No, we don't want to be affiliated, they sometimes back them'."

The idea of buying out-of-state instead of supporting the local community caused controversy and residents came together to voice their concern on the importance of helping the local economy before buying from out-of-state agencies.

The Bonham Chamber says the whole issue is a misunderstanding and they have not purchased or backed any out-of-state shirt companies.  The Chambers Chair Elect, Jack Bonds says, "The main point we want to get across today is that we are not affiliated with the shirts, regardless of what some may or may not say.  It's not true."

The sign may have worked its magic, the Bonham Chamber addressed the issue at today's meeting and board members say they are trying to come up with a better way to communicate with the community and inform them of future plans.