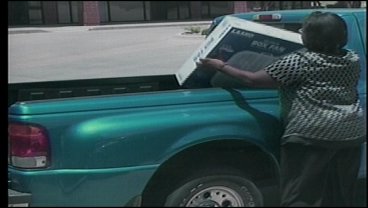 You've heard us talk about the KTEN Fan Drive.  As the temperatures continue to rise the need for fan donations rises as well.  Meredith Saldana met with the group that we are collecting fans for in Ardmore about why fan donations are so important.

They say the number of people coming in with cut off notices is higher during the summer.

And with the rising temperatures a home without air conditioning could cause health problems like heat strokes.

Toni Washington with the Grace Resource Center says one fan can make a big difference to a family.

"Sometimes we'll hear they invited other people over to their house just to cool off in the evenings and sometimes those people come in for a fan.  We just hear a lot of just thank you, just gratitude, because it's just little things for these people you know."

As the temperatures rise we're asking that you think of those less fortunate and drop a fan off at either our Denison station or our Ardmore station.

If you're in the Ardmore area and in need of a fan you can stop  by the Grace Resource Center downtown at 11 A St. NW.