One of the Largest Drug Busts in Carter County History - KTEN.com - Texoma news, weather and sports

One of the Largest Drug Busts in Carter County History 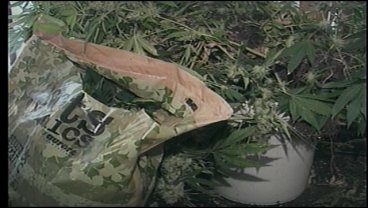 A major drug bust Monday in Carter County that landed a father son duo behind bars.  KTEN's Meredith Saldana has more on this story.

Our cameras were rolling as they brought out over 30 weapons and thousands of rounds of ammunition.

That's in addition to over 80 marijuana plants found inside the home on Gene Autry Road.

The two men are accused of growing large amounts of marijuana in their home.

"Not normally.  This is, like I said, a pretty good one.  They cultivated a lot of the plants and also with the numerous weapons that was in the residence that we collected, too.  It's just gonna be a pretty big deal."

Bradley and Christopher Gaither were arrested for cultivation of marijuana and possession of fire arms during a felony.