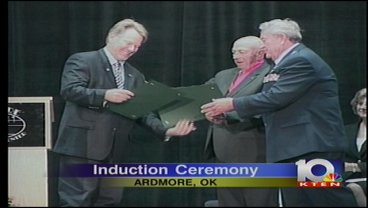 Hundreds turned out in Ardmore Monday to honor the two men we first introduced you to last week.  The two  veterans were being recognized by the Ardmore Military Memorial Museum.  KTEN's Meredith Saldana was there and has their story.

The purpose of the Hall of Honor is to recognize area veterans whose achievements are above and beyond in both their military lives and civilian lives.

Colonel Little says, "What more could you ask for in a lifetime?  This is really a capstone and I truly, truly appreciate it."

Major General Logan told us, "Well it's a thrill and an honor and especially to see the people from my past who have come from as far away as Orlando, Florida and Colorado Springs and Kansas City to be here for this event.  They're people that I have very fond, good memories of."

Certificates were given to the veterans by several different state representatives, some even signed by Governor Henry.

Each veteran had some time to share memories they had with those in attendance.