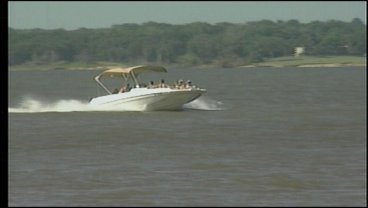 The first accident happened near the Cedar Creek Marina, on the Texas side of the lake.  Authorities say a 42-year-old man dove off a cliff, into the water and severely injured himself. Crews were forced to take a boat to meet the man on one of the islands, before transporting him back near the marina. Lifestar then air-lifted him to a Dallas hospital. Authorities say he was alert, but no other word on his condition is available at this time.

Also, around 7:30 Saturday night crews responded to a jet-ski accident in the same area. Officials tell us the injured person should be ok.

And, on the Oklahoma side, another medical helicopter was called out again to a boating accident. According to OHP's Lake Patrol, a boat was traveling south of Soldier Creek, going around 85 to 90mph when it hit a cruiser weight. The driver and passenger were thrown from the boat. The driver refused medical treatment. The passenger, James Randel Waters, 50 of Oklahoma City, was air-lifted to Parkland Hospital. He was admitted with head injuries but in fair condition.

Crews were also on scene until around 8pm near the Willis bridge. Officials tell us a child was hurt while tubing.