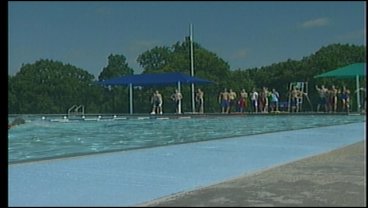 Summer officially starts Sunday, but for weeks kids have been busy spending their afternoons at the pool. This year, though, all public pools are taking extra measures to keep your kids safe. KTEN's Katy Blakey explains.

The extra measure is part of a new federal law, requiring all public and semi-public pools to install new main drain covers.

It's referred to as the Virginia Graeme Baker law - the 7-year-old granddaughter of former Secretary of State James Baker. She died after being caught in a drain at a pool party in 2002. Since then, her mother and grandfather successfully lobbied for a new law that requires anti-entrapment drains in public pools.

These drains are now present at Sherman's Splash Park. They are designed to prevent a child's finger or clothing to become stuck in the drain. The city says this is a positive step in preventing future accidents.

"Obviously preventing accidents is always a good thing, "said Theresa Hutchinson with Sherman's Parks & Recreation. "The only problem we had with it was a limited number of manufacturers were making these drain covers at first. But we got them and installed them as soon as we could."

The change didn't come without a price tag. Replacing the drains cost the city around $7,300 and in the beginning, city officials say there were only 3 manufacturers - that they knew of - that made the special drain.

Sixty-eight properties across Grayson County are required to install these new drains. So far, the Grayson County Health Department says cities and businesses are following the new law. As of right now, these drains are not required on residential pools.