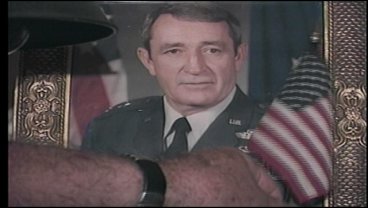 The Military Memorial Museum in Ardmore will be inducting two local veterans next week. We're going to introduce you to each veteran. We start with Major General Albert Logan. He just recently moved back to Tishomingo after being gone for more than 30 years. KTEN's Meredith Saldana has his story.

"He's just a very honorable, patriotic person," says Martha McGill-Kirk, who's a friend of Logan's. "So, I think that he's very, very deserving of this honor."

Yet, he's still humble. It took us several times, asking the General what his biggest accomplishment was, before getting an answer.

"He just doesn't say much about his accomplishments," says McGill-Kirk.

"Being promoted to General is quite an honor and accomplishment," says Logan. "So, I'm proud of that, but I guess proudest of having flown all those airplanes, and did what I did and being here to talk about it."

We asked him what next week's induction means to him.

"Well, I'm flattered, I'm thrilled, I'm honored to be selected," says Logan. "It will be something to tell my grand kids about."

A fighter pilot and an instructor who served more than 30 years, including flying in Vietnam, talks about what he remembers most.

"I was over there three different times," says Logan. "The sense of accomplishment and frustration at not being able to do what we thought we needed to do and being constrained politically."

We asked General Logan his opinion on the controversy about whether Vietnam was actually won or lost.

"It offends me to read and here about us losing the war," says Logan. "That's not true. We did leave the war but with honor."

Monday, he'll put on his uniform again. This time to be honored by his fellow veterans and his community.

The induction ceremony will be held Monday at 2 p.m. at the Ardmore convention center.