Child Hit By Vehicle In Ardmore 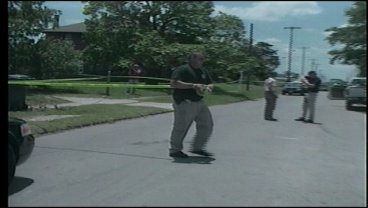 A tragic story in Ardmore. A young girl hit by a pick-up truck in front of her house. Meredith Saldana was on the scene and has the latest.

So far, all we know is it was a 7-year-old girl who was hit by a Burlington Northern Santa Fe truck, and police say when she left with paramedics, she was seriously injured.

"You just gotta be there to see this," says Mario Cruz, a witness. "This innocent child just getting out of summer school, and then her other little sister inside the house right now crying for her sister."

It happened just after noon in the 600 block of A Street Northeast. Cruz was driving behind the truck that hit the 7-year-old girl.

When he realized what had happened he rushed to her side.

"I grabbed her and flipped her over me," says Cruz, "and my brother, by that time, everybody started to get here, and they took her. They just got in the ambulance and took her. That's how bad she was, and I pray to God that she makes it."

"Initial reports are the young child ran out in front of this truck" says Richard Ackerman, Ardmore police deputy chief. "The truck was unable to stop and collided with the young child."

The police are currently investigating whether speed was a factor.

"Because of the severity -- of the potential severity -- to the injury, we've asked for our skid team to come out and conduct an investigation to see if speed was a factor, and other factors may be involved," says Ackerman.

"There aint no signs here," says Cruz. "Watch it, slow down, child or school, nothing.   Everybody catches the bus right around the corner. You don't see no signs from there all the way down. You don't see nothing about kids, and it's gonna get worser because summer school's beginning to start."

Of course, we'll bring you more information as it becomes available to us.