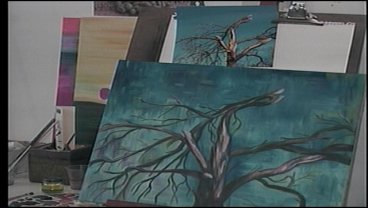 Despite the down economy,  surprisingly the Ardmore Art's District is seeing a boom in interest and activity.  There were several new art classes that were announced Wednesday as well as workshops downtown.  But the big buzz seems to be about the new Paradise Alley Market Place that kicks off this weekend.   Meredith Saldana looked into this for us.

Years ago downtown Ardmore was booming, but as the town grew businesses spread out.

But just in recent months interest in downtown Ardmore has spiked.

Especially in the art's district.

Susan Yeager, owner of Studio 107 on Main Street, says in the year they've been open interest has continuously grown.

Yeager says, "Yeah, we have a lot of people that are interested in learning more about it and  there's a lot of talent here and we have been very excited by the people that have come in you know.  Sought us out and come in so it's going well."

Studio 107 offers private lessons and even hands on art workshops.

Other Ardmore residents also noticed the spiked interest, joined forces and have decided to start the Paradise Alley Market Place that kicks off Saturday.

Nathan Ebberts is one of the organizers and says, "With this economy you have people looking for deals, better deals.  You have vendors looking for lower over head with less of a store front reaching a wider variety of people.  And this kinda brings everybody in from the surrounding communities into one event."

About 40 vendors will set up in Paradise Alley between Main Street and Broadway Saturday morning right in the heart of downtown, just behind the produce market at the Market Place on Broadway.

The Market Manager Lindle Flatt Jr says, "This is gonna be great.  It's gonna bring in a lot of people that normally wouldn't come out just looking for vegetables and it should be a dual benefit for both markets."

Local business owners like Susan Yeager say the new market is good for the shoppers, vendors and the local economy.

"I think people are wanting to spend their money locally so it goes into the local economy which always helps everybody here."

The new Paradise Alley Market will open around 7:30 am to about 2 pm.

For more information on Studio 107's workshops, lessons and art you can log onto www.studio107ardmore.com.

And just announced Wednesday the Goddard Center in Ardmore will have granite sculpting classes in addition to their other art classes.  For more information you can log onto their website at http://www.goddardcenter.org/classes.html .