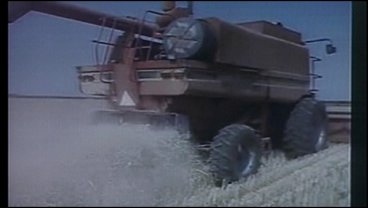 Severe weather this year had many wheat farmers worried their crop may have been destroyed.  But now that the harvest is under way some farmers are breathing a sigh of relief, while others are taking a hit financially.  Meredith Saldana met with the experts for us and has more on this story.

In the last few months Oklahoma and Texas wheat farms suffered through a late freeze in April, droughts and even floods.

Soil and Crops Consultant, Eddie Funderburg, with The Noble Foundation says the late freeze caused the majority of the damage.

Then they were hit with the drought, followed by the heavy rains that caused excess plant disease, loss of crop quality and a late harvest.

And while some area farmers are excited to see that their crop wasn't a total loss, the majority of the farmers are feeling the financial loss.

Over the weekend the USDA came out with their latest report on the crops in Oklahoma and Texas.

Funderburg says, "The USDA rated the crop conditions as of last Sunday, June 14th.  They rated Oklahoma as being 75% poor or very poor and only 9% as good, none was excellent.  Texas was even worse, 75% was rated poor or very poor.  However, the crop nationwide is pretty good.  Even though we have a very bad crop the nationwide crop is only down 1%."

Funderburg says it could take a couple of years for the devastated wheat farms to fully recover.