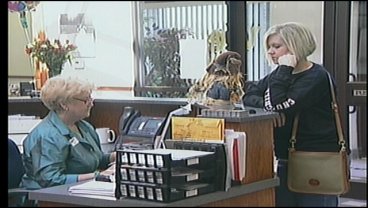 We hear so many bad things about our nations economy, but is what we hear indictive of what happening in Texoma. Deeda Payton hit the streets today to find out how our local economy compares to the rest of the nation.

You could say Texoma is bucking the trend. When it comes to jobs, Workforce Solutions Texoma says less people are drawing unemployment as compared to the rest of Texas and even the country. Also, our unemployment rate is considerably less. "It's obvious that we've done better than the state by at least two percentage points sometimes three percent points."

Local residents, though, have mixed perceptions of how our local unemployment rate compares to the rest of the nation. "I think we are probably a little bit lower." "It's probably worse I have friends and family that haven't been working much lately."

When it comes to the local housing market, realtors say things are positive. "The housing market in Texoma is great! We haven't experienced a spike in appreciation like other areas like for example, California and our eastern seaboard, our prices are much more stable and we haven't had any bubble to burst." "We've found several and they all seem to be nice homes and for considerably less is some cases than in California."

Hal Hogan is thinking of relocating to Texas from California because of the economic bubble we seem to be in. But, some residents think Texoma is being affected more than the rest of the country. "I think we're worse." "I think there's just a lot of houses on the market and not enough people are willing to buy."

Speaking of buying, Landmark Bank in Denison says people are loosening up on their pocket strings. However, local residents believe people are being more conservative with their cash. "I think people are saving more until they know exactly what's going to happen with the economy." "I would definitely say they're saving more...I know we are."

When it comes to lending, Landmark says they are experiencing a refinance boom because of the record low interest rates so they do feel Texoma is bucking the national trend.

Even though we aren't experiencing the economic downturn as severely as the rest of the country, we aren't immune.