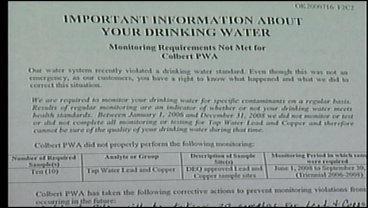 Recently, Colbert residents were notified that their drinking water has not been monitored for lead or copper in three years. Now they want answers. KTEN's Deeda Payton reports on the issue.

The city is required by law to notify residents if there is even a chance that the public's drinking water has been contaminated, but that's where the communication stopped. Now residents want to know why their city leaders let it go as long as they did without warning.

1,065 people live in Colbert and the majority drink from the public water system. Water that may or may not have lead or copper in it. That's because the city hasn't monitored its water since January of 2006. News that isn't that shocking to some residents. "Colbert has always got water problems of one kind or another."

The Department of Environmental Quality says Colbert is required to test for chlorine, E. coli and fecal coliform twice every month, which they are doing.

What they haven't kept up with is their lead and copper testing, which must be completed every three years. So why was the required testing not completed? That's what residents want to know among other things. "Have they done what they were supposed to since they sent the letter out?" "I'd like to know that they are going to test it and make sure what we're drinking is good."

The DEQ says they are now requiring that the city test the water for lead and copper twenty times between July first and December 31st of this year. But in the meantime, residents want to know what they can do to protect themselves. "I think they ought to take care of the test I still drink it, but who knows how much is in it or what's in it unless you test it yourself." "Luck have it I have a tap at home with a filter so I filter the water I drink."

The DEQ says in-home filters can protect you, but only if maintained properly meaning filters must be changed or replaced every few months. If you are worried about your safety, they recommend that you boil your water.

We did try to contact the mayor about the issue, but our calls were not returned. We'll keep you posted on the upcoming water tests as the information becomes available.