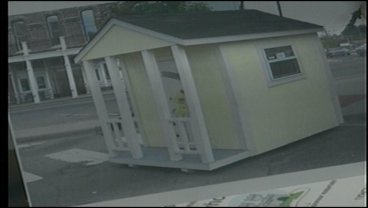 The economy has many groups cutting back especially when it comes to grant money.   Fannin County Family Crisis Center has found them selves on the cut back list, but the Crisis Center is finding ways around it, by using creative ways to raise money.

This is the second year the crisis center has held an event like this, a fundraiser to help replenish their lost funds and continue to help those families affected by violence.   The fundraiser is helping to build playhouses for abused children.  The center is asking for monetary donations or supply contributions and the center says the community has already begun to step up and help, but there is still a long way to go.  The center's Executive Director Becky Williams says, "We did have funding through 3 or 4 grants, but they were cut so now we are hoping the community will donate and they have already helped us a lot.   We are also doing fundraiser's to raise extra money."

Last year the fundraiser was able to put a smile on four lucky families' faces as their children were able to take home a new playhouse.  The center hopes to help more families this year; their goal is to build at least 5 playhouses.  The playhouses cost about $1,000 each to build so that leaves the center's monetary goal at around $5,000 to $6,000 dollars.  Tickets will be raffled off to the families in need this fall and the winners will be announced around Christmas.

This year's theme is fairy playhouses and donating is as easy as a phone call.  You can reach the Crisis Center's office at 903-583-7694.  Christina Lusby, Reports.