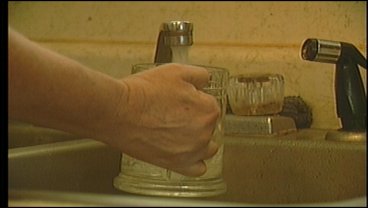 In Colbert, OK, residents received notice Saturday that the town's public works administration has not properly monitored its water for sometime. So, what does that mean to people who live in that area and have been drinking the tap water? KTEN's Jhen Kordela explains.

The water's clear, but what's in it may be a little bit foggy. That's since a letter was dropped off at homes in Colbert from the town.

It states, "Between January 1, 2006, and December 31, 2008, we did not monitor or test or did not complete all monitoring or testing for tap water lead and copper and therefore cannot be sure of the quality of your drinking water during that time."

Now, some are concerned.

"Everybody should have been notified long before now," says Colbert resident Mary Duke. "The testing hasn't been done for two years."

Duke moved to Colbert in August and has been drinking the tap water ever since.

"There's not a foul taste to it or anything, but I am concerned about the lead and copper contents," says Duke.

According to the letter, the water's set to be tested between July and December of this year.      But, Duke's concerned about the health effects of whatever's already in her system.

According to the Centers for Disease Control and Prevention, elevated levels of copper can cause anything from vomiting to stomach problems.

Lead can cause high blood pressure and damage kidney, according to the Environmental Protection Agency.

Again, there's no telling what's in the water, though, until test results come back from the Department of Environmental Quality.

"I tried calling the number listed on the letter, Mr. James Coble, and got no response," says Duke.

KTEN tried calling that number as well, to get the Colbert's side of the story. But, the line kept ringing with no answer or machine to leave a message.

We will, of course, follow up on this story.