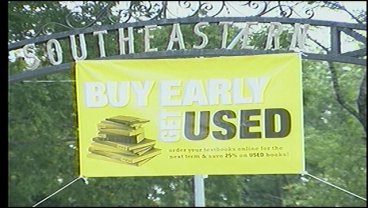 Southeastern Oklahoma State University has taken the temperature on our financial climate.      And, officials there have decided to respond to it by not raising tuition this year. It's the first time in a decade this has happened. KTEN's Jhen Kordela has more.

SOSU usually bumps up tuition and fees by 9 percent a year. But, this year's different, And here's why:

In the magnolia capitol of the sooner state, SOSU's campus is calm, with some students sticking around for summer classes. Many though, who are on their summer break right now, will get a financial break when they come back to campus.

"We feel that we need to be respectful of the economic conditions and, therefor, hold our tuition at the present rate," says Ross Walkup, VP of business affairs.

After 10 years of rising rates, school officials had some important issues to consider this time around, in what's being called the "great recession."

"Paying for education is always a challenge," says Clinton Harders, a student at SOSU. "You have to get creative sometimes."

From books, getting to campus, to parking tickets, these things add up.

"I know people get tickets all the time for parking, and there's no parking," says Ty Hull, a senior at SOSU.

Getting an education isn't cheap.

But at SOSU, students are finding ways.

"Well, it's kind of been a yearly thing," says Billy Elles, a student at SOSU. "I've had to fill out scholarships nearly every day this year, and it's just work and work and work. I've probably filled out nearly 40 scholarships just to be able to afford college."

Approximately 70-percent of students on campus receive some type of financial aide, which the university says it's committed to continue to provide.