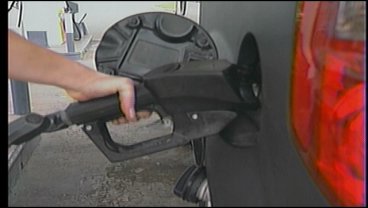 The price at the pump keeps going up. So, what's driving the increase? KTEN's Jhen Kordela explores the concept and whether it's related to the economy.

No matter what way you look at it, increasing gas prices just seems to provoke the same kind of reaction.

"I feel they're a little high -- quite a bit high right now," says Jerry Allison, a consumer.

Adds Joe McCurdy, also a consumer: "I don't know. I think they think they can get away with it. I mean, what are we going to do? We got to pay what we got to pay."

But, the increase could be linked to some subtle changes in our economy.

"It's anticipation that as economic activity begins to increase, there's more demand for gasoline, and prices tend to go up in anticipation that demand's going to go where it was a couple years ago," says John Mabary, a financial advisor.

And, the New York Stock Exchange is the hub of that activity. John Mabary, of Edward Jones in Sherman says, things are looking up in that category.

"The market from March 9th through now -- the S&P is actually a little over 35 percent, and we've seen a pretty good rebound here," says Mabary. "And, what that means is that the value that people are going to pay for these stocks -- the S&P and the Dow has come up quite a bit."

It's one of many signs the frozen market could be starting to thaw out.