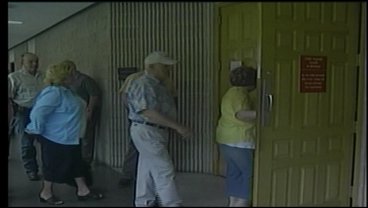 There was a lot of waiting. After a week of waiting, seeing testimony and hearing testimony Patricia McMillion was found guilty of murder and sentenced to 80 years in prison. KTEN's Deeda Payton has the reaction from family members.

The district attorney asked jurors to consider three things: what Kenneth McMillion's life is worth, that he has no rights in this case because she terminated them and the third point, to find the remorse. The D.A. Also insisted the crime was calculated and brought up she dumped the gun in a lake, his car at a Dallas strip club and finally drove his body to Louisiana for alligators to eat.

The defense spoke mostly about the special issue of whether the murder was committed in sudden passion. Also mentioning McMillion was abused and her clean record.

Harold Ballard is accused of helping McMillion take the body to Louisiana and it was his cell phone records that helped authorities track them down. The D.A. Says a plea deal is still possible for Ballard.

In the end, jurors did not believe the crime was committed during sudden passion and sentenced 49-year-old Patricia McMillion to 80 years in prison with a $10,000 fine.  The defense has already announced plans to appeal.