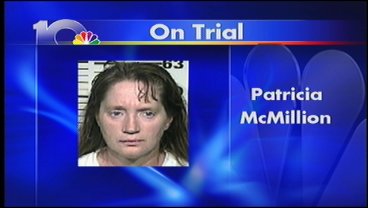 Patricia McMillion has been found guilty of murder by a jury.
Trial has entered sentencing phase.

More details on KTEN.com to follow, and on KTEN News at 5P.

In Grayson County, 12 jurors are deciding whether one woman is guilty or innocent. The prosecution and the defense rested in the Patricia McMillion murder case Tuesday. KTEN's Jhen Kordela was in court most of the day. She has the latest.

The jury began deliberation Tuesday afternoon and decided to head home to sleep on it for the night. This, after hearing from a slew of witnesses earlier in the afternoon and a confident prosecution.

"Everything's going well," says District Attorney Joe Brown. "The testimony -- it's been a long week. The jury should be able to get it, and hopefully they'll make a fact determination of what really happened out there that day, and everybody wants to know what they think."

The jury heard from a past co-worker of Kenneth McMillion, from Texas instruments, a defense witness, there to talk about the type of person he was. The defense also brought Kenneth McMillion's ex-girlfriend to the stand, who reportedly carried on a relationship with him while he was still married to Patricia.

But, the main argument carried on from Monday was that of one expert's word against another's. Two licensed professional counselors, one who claims Patricia McMillion was verbally and physically abused, the other saying she does not fall under the category of an abused spouse.

The defendant's former divorce attorney, Susan Carter, believes she was though.

"Well, I haven't watched very much of it," says Carter. "But, in my opinion she was an abused spouse."

Carter represented Patricia McMillion in 2007 and 2008, just months before the murder of Kenneth McMillion took place.

Again, the jury has gone into deliberation and will reconvene at 9 a.m. Wednesday.