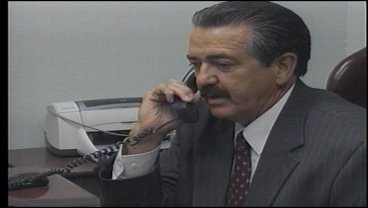 In Ardmore, there's a new Deputy Chief of Police in town.  Meredith Saldana sat down with him Monday and has more on his story.

His name is Richard Ackerman and he and his wife have moved here from California so he could take over as second in command at the Ardmore Police Department.

He arrived Friday afternoon and he's already been to Lake Murray and several area restaurants and says so far he's adjusting well.

Ackerman brings almost 35 years of law enforcement experience to Ardmore, 32 of those years at the Los Angeles Police Department.

As deputy chief his primary job will be supervising the patrol side of Ardmore's law enforcement.

Ackerman says, "Police work is the same no matter where you go.  It's just maybe handled a little different.  I think the same thing applies here.  I'll be looking to have officers who are professional officers who know what they're doing, how to talk to people, how to handle situations and that's my goal."

He also says he will make sure that the police work here in Ardmore is at the same level as any other city in the country and that residents can expect the same quality of law enforcement.

Ackerman tells me he hopes to be an asset to the department as well as the city of Ardmore.