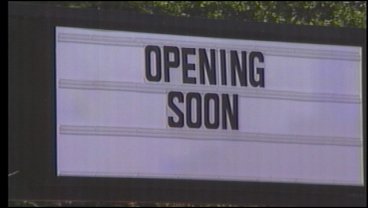 In the past year or two Denison has seen a spike in new projects like lake development, the new Texoma Medical Center and Cigna. But the rate of new developments has drastically slowed. KTEN's Katy Blakey has more.

When the national economy is hurting it effects our local development. Denison's Development Alliance says they are seeing a drastic slowdown and many businesses are not looking to re-locate here or anywhere.

Opening soon - it's a sign city leaders like to see. But lately, all Denison has been seeing is small openings, like a new steak house called Crockett's.

"I've been doing this for 22 years and this is the slowest I've ever seen it as far as companies looking to re-locate or expand, "said Tony Kaai, Executive Director at Denison Development Alliance. "We know the strong will survive and those are the types [of companies] we're trying to recruit here once this passes."

One thing city leaders are looking forward to is the opening of the new Texoma Medical Center on Highway 691 and 75, along with the surrounding retail and businesses that should come with it.

Tony Kaai says 2,000 people working at the new hospital will mean new restaurants and retail along that highway intersection, and hopefully we'll see some of those projects soon.