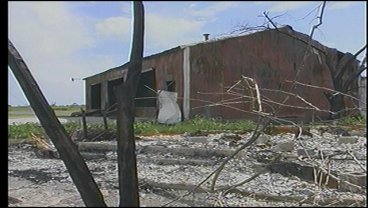 A big weekend for residents of Fox, Oklahoma. KTEN's Jhen Kordela explains how a community has come together, following devastating wildfires earlier this year.

Back in early April, a number of wildfires broke out across the state of Oklahoma. In one day, crews were battling 17 in Carter County alone, including four major fires in the Fox / Graham area.

You may remember, while the Fox volunteer firefighters were on those fires, some were fighting flames across the street at the school. That's when yet another fire broke out of a home right next to the station, then caught the station on fire. Crews couldn't get to it in time to save the building.

Since then, a contractor has estimated the cost to rebuild at $81,000.

"We had real good support from our community," says Fire Chief Rudy Stewart. "This community always supports their fire department."

The community showed support Saturday at a fundraiser, put on by the Fox / Graham Fire Department, with help from the Sonic lodge of Healdton. Together, community members came up with more than $21,000 to go toward a new station.

From here, officials are still waiting on an insurance settlement, and Chief Stewart says they'll just have to wait and see what they have to work with to rebuild.