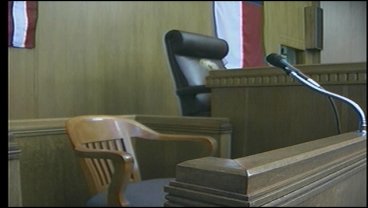 Patricia McMillion took the stand in her own defense Firday morning in Grayson County. The woman accused of killing her ex-husband faced a crowded courtroom and for the first time the public heard her side of the story. KTEN's Katy Blakey has more.

There is one thing Patricia McMillion made clear on the stand Friday. She pulled the trigger - fatally shooting her ex-husband in the back. But, she says it was in self defense after years of mental and emotional abuse.

The defense presented medical records where Patricia's doctors documented abuse and encouraged her to contact the Woman's Crisis Center.

But it was her description of the day of the murder in June of last year that caused everyone in the courtroom to listen closely.

According to Patricia, Kenneth had been at their Luella home earlier in the day with Grayson County Sheriff's deputies to investigate property he believed was stolen. She thought Kenneth had left, but when she saw him outside, she said he looked angry. So, she grabbed her .22 caliber pistol that she kept under a bedroom pillow and put it in her pocket.

She says they got into an argument, which turned physical outside the house. That's when she pulled the gun and he knocked it to the ground. There was a scuffle and Patricia McMillion told jurors she was afraid for her life - afraid he would get the gun first and shoot her. She grabbed the gun first and fired - fatally shooting Kenneth McMillion in the back.

Her boyfriend, Harold Ballard arrived at the home and plans were made to dispose of the body in Louisiana.

The District Attorney's Office says Patricia's account is not consistent with the evidence or the testimony other witnesses gave earlier this week. And says despite investigators' multiple trips to her home in the days following the shooting, at no point did Patricia come forward and give this account.

"I think the jury is getting a very good understanding of what kind of woman she is and what happened there, " said District Attorney Joe Brown, who says they were well prepared for this case. "Everything we heard is what we expected to hear and we certainly haven't changed our opinion and feel like the evidence is what we thought it would be."

McMillion's attorney, Bob Jarvis, declined an on-camera interview, saying he would wait until after the trial wraps up. The trial will resume on Monday, but Brown says he is hopeful this case will be handed over to the jury early next week.