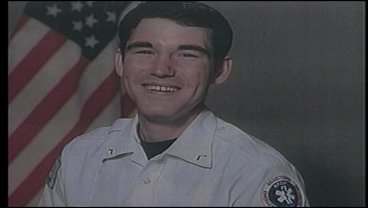 Oklahoma legislation to help families of fallen rescue workers.  It came from a tragedy right in the heart of Texoma some six years ago.  Meredith Saldana has more.

It was a tragic accident that took the lives of two paramedics in Ardmore.

The new legislation is aimed at helping the families of EMT's who become victims of tragic accidents like this while serving others.

It was a Sunday evening on I-35 in the Arbuckles.

Gilmore, 31, and Skelly, 27, were at the accident scene on Interstate 35 north of Ardmore helping a woman into their ambulance when a driver lost control during a rainstorm.

The driver's sport utility vehicle struck and killed the two paramedics and the woman.

Senator Johnnie Crutchfield says now when EMT's purchase tags for their vehicles $25 of the tag money will go into a fund for the families.

Senator Crutchfield says, "This would allow them then, when there is a tragic death of one of their EMT's on duty, this would allow about $5,000 to be given to the family to help out with costs."

It costs an average of about $8,000 to cover burial costs for a loved one today.

Senator Crutchfield says $5,000 isn't a lot of money but it's meant to help the families with immediate costs for the men and women who put their lives on the line.