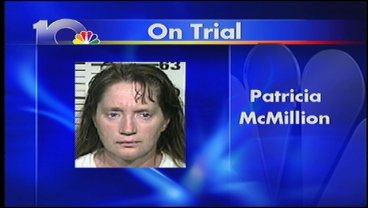 The murder trial of Patricia McMillion continues Friday. The Grayson County woman is accused of murdering her ex-husband one year ago. For the first time McMillion took the stand, claiming she acted in self defense.

The case has generated a lot of speculation and interest. The courtroom was packed Friday morning when Patrcia McMillion first spoke to the jury. In detail she described her life with ex-husband Kenneth McMillion, describing a history of mental, emotional and sometimes physical abuse.

In her words she had no plans or scheme to kill Kenneth. And, she says the events that unfolded at their Luella home were not planned. That an argument became violent and she shot him in defense.

But prosecutors say that's a life. Patricia's actions were, "cold and calculated." Several members of Kenneth McMillion's family were in the courtroom this week, many of them shedding tears during Patricia's testimony. They declined to talk to us on camera but did say this entire ordeal has been "crazy."

"We're glad to get it to trial for Kenneth McMillion's family. There's been a lot of speculation out there about who did what. I think this will set the record straight. We're putting everything out, the good and the bad. And what everyone in the community should understand is who did what. I'm glad it went to trial for that reason."

There's also the role of Harold Ballard, Patricia's boyfriend. Prosecutors say after Patricia killed Kenneth, Ballard and her drove to Louisiana where they dumped the body in a canal.  Jurors have yet to hear from him directly. He's charged with evidence tampering. District Attorney Joe Brown says it's still possible jurors could hear from him.

Bob Jarvis, Patricia McMillion's attorney, decline to talk on camera until after the trial.