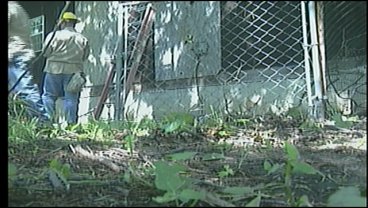 A big part of the damage in Durant came from huge trees, falling on homes, businesses and electricity lines. And, more than 36 hours after the storm, some were still without electricity. KTEN's Jhen Kordela has an update.

"We have never -- we've been here 20 years, and we have never had anything like this," says Durant resident Ann Bryant.

crews have spent days fixing lines. At the highest point, 2,000 people were without power.

"When we first heard it, I got up, and I thought it was just a real bad storm, and maybe lightning had struck a tree," says Bryant. "So, then at 4 (a.m.), I got up, and I got the flashlight, because we found out that we had no power and looking around, you could just see limbs everywhere."

Now, the biggest issue, is safety.

"Any time you see an electrical line down, never touch it," says Dean Pollack, of OG&E. "In a lot of cases, it may be dead. But, you never know, and you don't want to risk it."

So, watch out for loose and low lines, as cleanup efforts continue.

OG&E hopes to have everyone's power restored as of Thursday night. But, officials there do advise if you're still without it, to go ahead and give them a call at 1-800-522-6870.