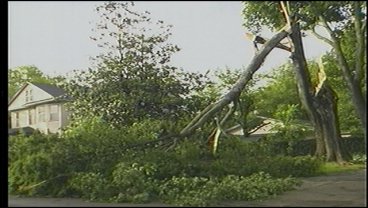 Severe weather in Durant woke residents up to storm damage.  Streets were covered in debris and fallen trees leaving many buisnesses, resturants and homes with severe damage.  The areas hit the hardest in Durant were Washington Street to North East 5th and main Street to University.  At least two homes were severly damaged down those streets. One home is now completely destroyed and the residents were pinned inside for over an hour this morning.

Many thought what they woke up to was a tornado, but the damage could be chalked up to strong winds, which according to KTEN's Meterologist Collin Daly can be stronger than an actual tornado.

If residents were not already awake from the storms and falling trees, they were awakened by the sound of clean up crews.  City Officals covered the streets removing debris from the roadway for drivers.  As they broke down the limbs, residents searched their properties, assessing their own personal damage.   "We had quite a bit of damage.   Our home's foundation shifted, we have broken windows, a lot of water damage and the roof is crushed," said Teresa Beck as she gazed at her broken home.

And just a couple of streets away, a home was completely destroyed.  A tree crashed down on the home, pinning a couple inside.  Neighbors rushed to where the house once stood when they heard screams for help.  "I heard a lady screaming for help so I went over to help her, said Kory Carroll, "They were pinned underneath the tree in between a sofa and a tree."  Also there to help Bryan Giannini, "We lifted heavy debris off of her trying to get as much weight off as we could while we waited on the fire department to get there.  We were just trying to keep her calm."  About an hour after fire fighters arrived on scene the couple was finally freed, but the man was left with injuries.  According to witnesses on the scene the man was taken to the hospital with chest injuries as he was crushed between a tree and  the sofa.  Officals say their home is a total loss.

Around 2,000 residents were left without power OG&E says they expect to fix the problem by tonight.  Also City Officals say if you do have limbs or trees in your yard and you want to get rid of the debris, you can take it to their land fill free of charge. The city is waving all fees for drops offs.