Reward Rises For Vandals in Healdton 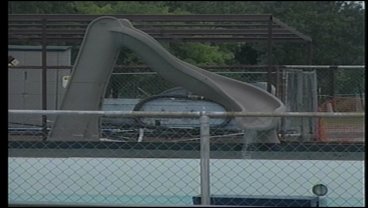 An update now to the vandalism and damage at the Healdton City Pool.  We told you about it over the weekend.  Meredith Saldana has more on efforts to help find whoever is responsible.

The Mayor of Healdton originally said they were offering $100 for information leading to the conviction of those responsible.

But since then more people have come forward and raised that reward to $300 and counting.

Expanded metal is being used to cover all the windows in efforts to prevent this from happening again.

This was the fourth time in only 3-years that the city pool has been targeted by vandals.

Mayor Herb Collier says they're tired of it and want it to stop.

We told you over the weekend someone broke in to the concession stand at the pool through a window.

They stole candy and cokes and destroyed the hundreds of hot dog buns for Sunday's community day.

But Collier says it wasn't what they stole that hurt them, it was the damage that was caused to the building.

And he says the reward has continued to grow because people are fed up with the vandalism's.

Collier says, "To try to catch these people and make them responsible.  This pool's for the kids, it's for the community and something like this really puts a hamper on it.  We've had to close for 2 days."

Since the pool has been closed they were able to get a few other things done like re-painting some problem spots on the pool and the exterior to the bathrooms and concession stand.

Anyone with information on those responsible is asked to contact the Healdton Police.