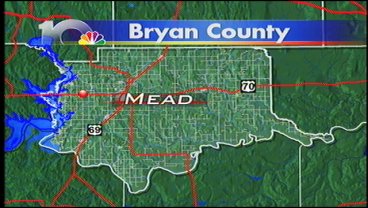 MEAD, Okla. (AP) - A passenger on a motorcycle is killed and the driver is in critical condition after slamming into a car near Mead.

The Oklahoma Highway Patrol says 23-year-old Kody Gertson of Durant died at the scene of the crash at 11:35 p.m. Saturday on U.S. 70 in Bryan County.

The driver of the motorcycle - 23-year-old Jonathan Olive of Mead - was flown in critical condition to a hospital in Texas. The patrol says Olive was speeding along the highway when he crashed into a car that turned out of a private driveway. Both he and Gertson were thrown from the bike. The patrol report says neither was wearing a helmet and that Olive may have been drinking.

The driver of the car and a passenger weren't injured.